According to a research report “Sonar Systems Market by Application, Platform (Commercial vessels, Defence vessels, Unmanned Underwater Vehicles, Aircrafts, and Ports), Type, Material, and Region (North America, Europe, APAC, Middle East, & RoW) – Forecast to 2026″ published by MarketsandMarkets, the sonar system market is estimated to be USD 5.9 billion in 2021 and is projected to reach USD 6.5 billion by 2026, at a CAGR of 1.8% from 2021 to 2026. Growth of this market can be attributed to the rise in maritime trade, developments in the offshore energy sector, and fisheries. The commercial sonar market in fisheries is experiencing high growth to locate fish breeding ocean waters as excessive fishing has resulted in lower catches. 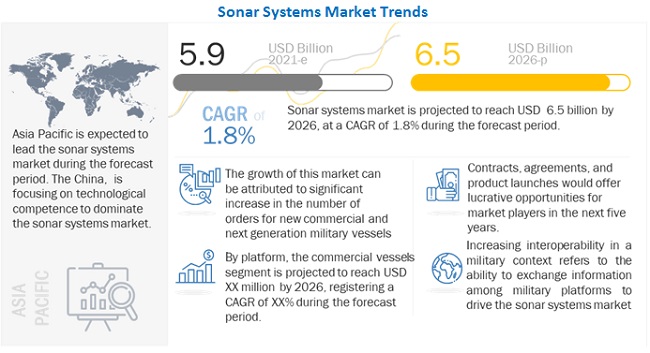 The rise in the number of sea attacks on vessels, submarines, and other warships, such as the attack on Egyptian Navy Ship in the Mediterranean Sea by intruders in July 2015, has led to the enhancement of Anti-Submarine Warfare (ASW) techniques for underwater warfare. The use of sonar in ASW techniques helps in detecting, tracking, and deterring enemy submarines, which has encouraged the implementation of sonar systems. Hence, there has been a continuous increase in sonar programs to enhance the ASW techniques to counter underwater attacks, which is driving the sonar systems market.

Sonar systems are mainly used on fishing ships, cargo vessels, and search & rescue boats, cruise ships, and port security, The sonar system market for commercial vessels is expected to grow from USD 450.8 million in 2021 to USD 494.5 million by 2026, at a CAGR of 1.9% during the forecast period.

Vessel-mounted sonar systems are mounted on the hull of a ship and used for underwater port security and by search & rescue teams. These systems are also used for commercial applications in fishery boats and hydrographic surveys. In naval vessels, they are installed in a ship’s bow for detection of threats such as submarines and mines.

Active sonar systems work only in the active mode, that is, they emit sonar waves and detect objects under the surface of a water body. These systems are mainly used by fisheries, deep-sea mining companies, and in hydrographic surveys.

Hull-mounted sonars are installed on the hull of ships. These include omni-directional sonars, forward-looking sonars, and echosounders. Naval ships are equipped with hi-tech sonar systems capable of detecting submarines. Increased installation of these sonars has resulted in high demand for sonar systems.

Our 850 fulltime analyst and SMEs at MarketsandMarkets™ are tracking global high growth markets following the “Growth Engagement Model – GEM”. The GEM aims at proactive collaboration with the clients to identify new opportunities, identify most important customers, write “Attack, avoid and defend” strategies, identify sources of incremental revenues for both the company and its competitors. MarketsandMarkets™ now coming up with 1,500 MicroQuadrants (Positioning top players across leaders, emerging companies, innovators, strategic players) annually in high growth emerging segments. MarketsandMarkets™ is determined to benefit more than 10,000 companies this year for their revenue planning and help them take their innovations/disruptions early to the market by providing them research ahead of the curve.

MarketsandMarkets’s flagship competitive intelligence and market research platform, “Knowledgestore” connects over 200,000 markets and entire value chains for deeper understanding of the unmet insights along with market sizing and forecasts of niche markets.