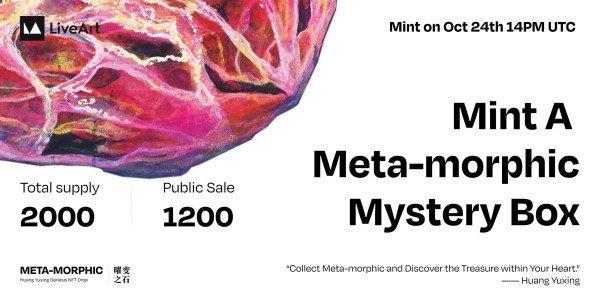 According to LiveArt, the NFT collection “Meta-morphic: Seven Treasures” by contemporary master Huang Yuxing will be open for public sale on October 24th, 2022 14PM UTC. Enter to get an allowlist.

After 197 stolen NFTs have been burnt, the total quantity of “Meta-morphic: Seven Treasures” deflated to 2,000 NFTs, and 1,200 NFTs will be available during the public sale for allowlist holders at a price of 1.5 ETH. In the pre-sale on September 23rd, 800 NFTs were sold out in one minute.

After the announcement of the public sale, Magic Eden, the top NFT launchpad from Solana ecosystem, also started promotion via official website and twitter.

Magic Eden raised $130 million in a Series B funding round in June, Meta-morphic is its first attempt to launch a major art NFT project into Ethereum. A long list of blue-chip alpha groups including APETANK and APELIST also expressed support and started joint campaigns.

LiveArt: A Web3 portal for the art industry

Partnering with LiveArt to release his first NFT series in the Web3 world was a well-thought-out choice by Huang Yuxing. For over a year, LiveArt has launched multiple art NFT collections.

In March, LiveArt launched their Membership NFT Mint event, with participation by tens of thousands of art NFT fans.

In May, LiveArt launched an NFT collection with the artist Reva entitled Sacred Garden, a generative art series that sold out in only 8 minutes on the OKX NFT platform.

From July to August, LiveArt held its LiveArtX Global 100 event, in which around 200 artists from more than 50 countries and regions created high quality artworks around the theme, “Digital Renaissance.” LiveArt engaged with their collector community, by issuing more than 20,000 Golden Pass NFTs that holders used to vote for their favorite artworks.The event sparked widespread attention and positive discussions on both Web2 social platforms and Web3 communities.

LiveArt has had much success with digital art and Web3. But what also assures Huang is that compared to other NFT platforms, LiveArt is rooted in the art industry, with a founding team hailing from the C-suite of premier auction houses and galleries.

Simply put, LiveArt is the perfect bridge between the Web2 and Web3 art worlds, aiming to provide one-stop NFT solutions for artists, collectors and institutions. It lowers the barriers for Web2 artists to enter the Web3 world by enabling creative and technological customizations, and by building high-quality NFT projects that connect physical art and digital art.